Flavor explains the animated show package they created with Cutters Studios for the 2020 AICP Post Awards. 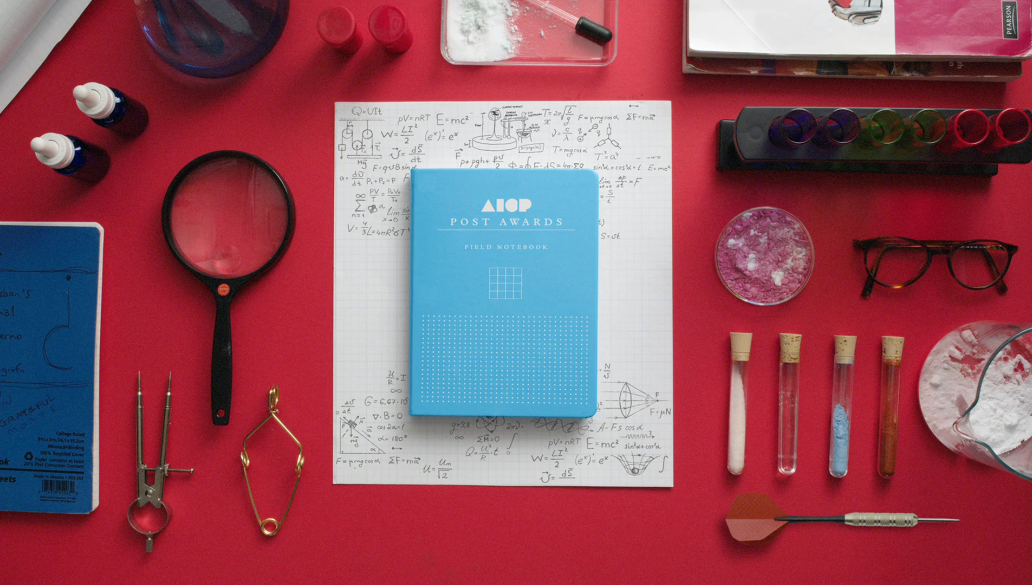 Flavor is a collective of designers and visual artists who collaborate on a wide range of VFX, live action, interactive and commercial projects across Cutters Studios' locations in Los Angeles, Detroit, Chicago, Kansas City, New York and Tokyo. Among their recent projects was a show package for the 2020 AICP Post Awards, which celebrates the very best work from the world's talented and resourceful commercial post-production industry.

Using Cinema 4D, After Effects, X-Particles, Maya, Nuke and Arnold, Flavor worked with Cutters Studios to create over 16 minutes of original content. The show package includes a live-action open titled, Weird Science, which was directed by Brian Broeckelman of Dictionary Films, as well as 29 category winner animations and an extensive credits sequence.

We talked with Flavor’s Jason Cook and Brian McCauley who served as co-directors, about the making of Weird Science, including how their team collaborated with members drawn from across the collective.

Tell us how you got this project.

McCauley: Cutters Studios is a longstanding AICP (Association of Independent Commercial Producers) member company. They were brought on board for editorial for the project, and the committee chose Flavor’s animation and VFX collective for design.

Who were the other collaborators besides Cutters Studios?

McCauley: We also worked with Another Country and Yessian, whom we work with regularly, for sound and music, respectively. 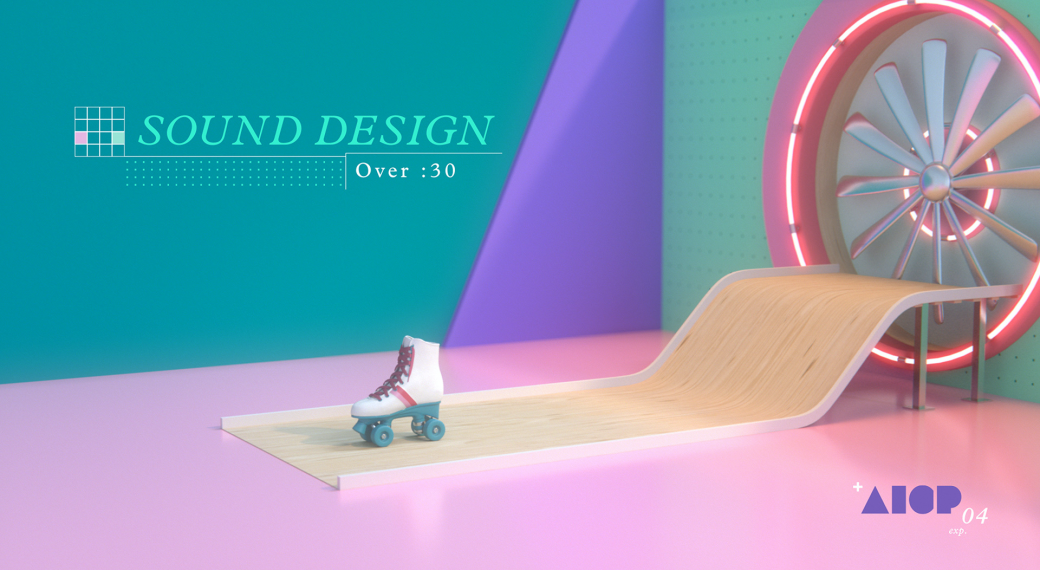 Describe how your concept for Weird Science relates to the awards?

Cook: This project came about in the early days of the pandemic. We were all reeling and adapting to the new work-from-home lifestyle. Everyone was in lockdown, and we imagined ourselves as mad scientists working in the lab creating crazy experiments to pass the time. Only this lab was a highly art-directed world where the experiments manifested in ways that were silly, irreverent, playful and weird. It felt like a fitting concept for the first virtual AICP Post Awards, and something everyone could relate to. It was a dark time, and creating these playful animations brought some fun and levity to the awards when we all needed it most.

Each of the 29 scenes is so unique and clever. Can you highlight a few that stand out for you?

Cook: We were working very quickly, so sometimes the best option was to do straight-up keyframe animations and use deformers to augment and art direct the effects. For the surface tension experiment, for example, we used C4D's Volume Mesher to create the bubble and a displacement deformer to bring it to life. 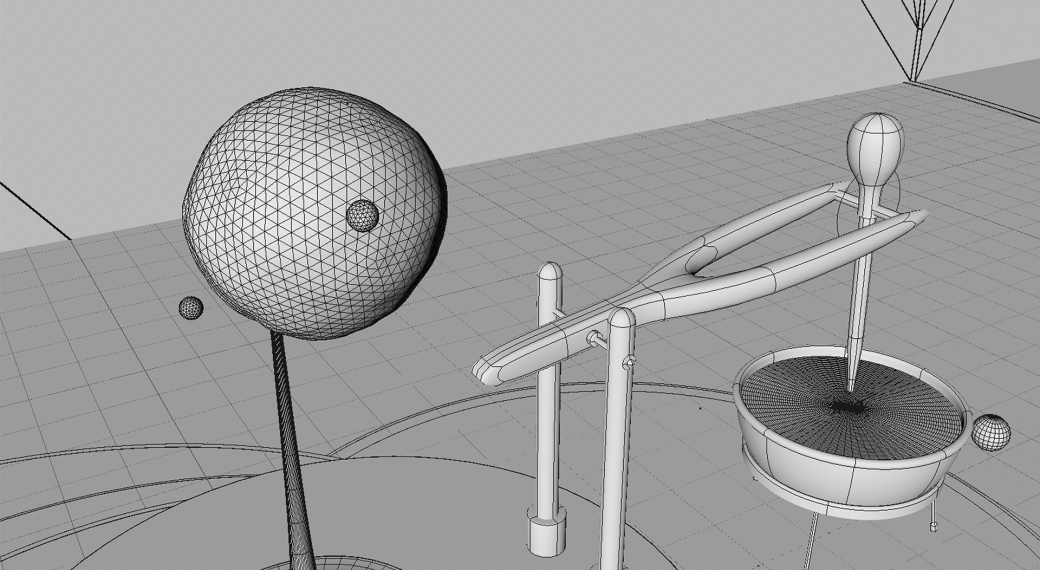 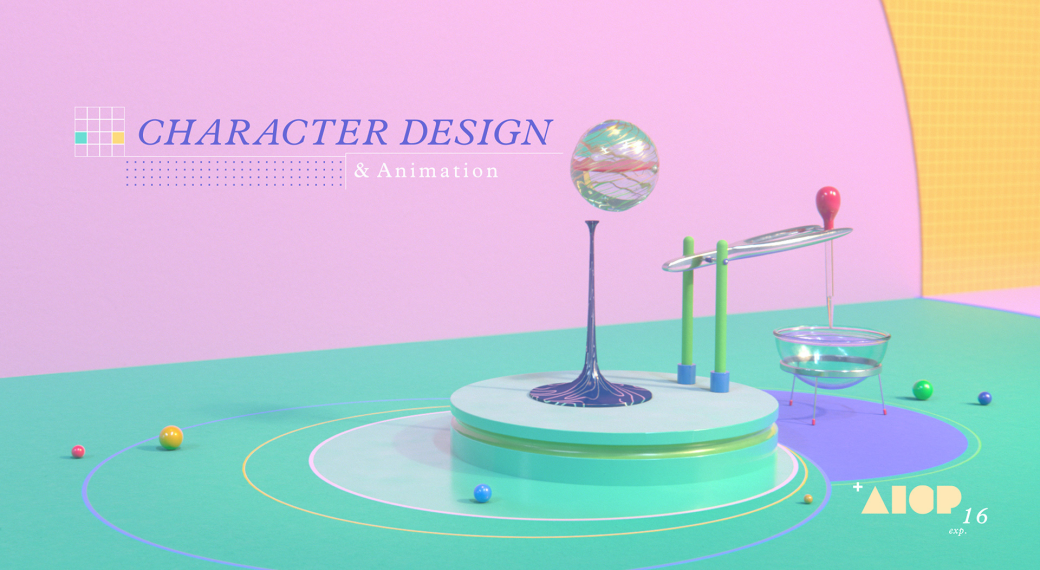 McCauley: A lot of the time we were making elements in other scenes, creating an Alembic file and then dropping them into our main scenes. For the viscosity experiment, we used an emitter that was feeding into a cloner and dropped into a tracer object and then sweeped. By making the different elements dynamic, we got a pretty realistic goopy liquid effect without much simulation time. I'd like to give a shout-out to EJ at Eyedesyn for that cool tip.

Give us some details on your overall process for making this.

McCauley: Using the award categories for reference, we created a design where the science-themed motif and custom shape language would elevate the meaning of each post-production craft award. Art Director Ella Yoon helped develop the look and feel for the lab environment and field notebook.

Cook: For each one of the experiments scenes we went through a very similar process where we first explored how to visualize the scientific principles in the most bizarre, weird or funny way we could imagine. Then, we sketched out drawings of the experiments and went into Cinema 4D to begin blocking out the designs. We had established a color palette, general shape language, textures, and a lighting direction, so it was really a matter for our design teams modeling building the scenes out with those variables in mind. 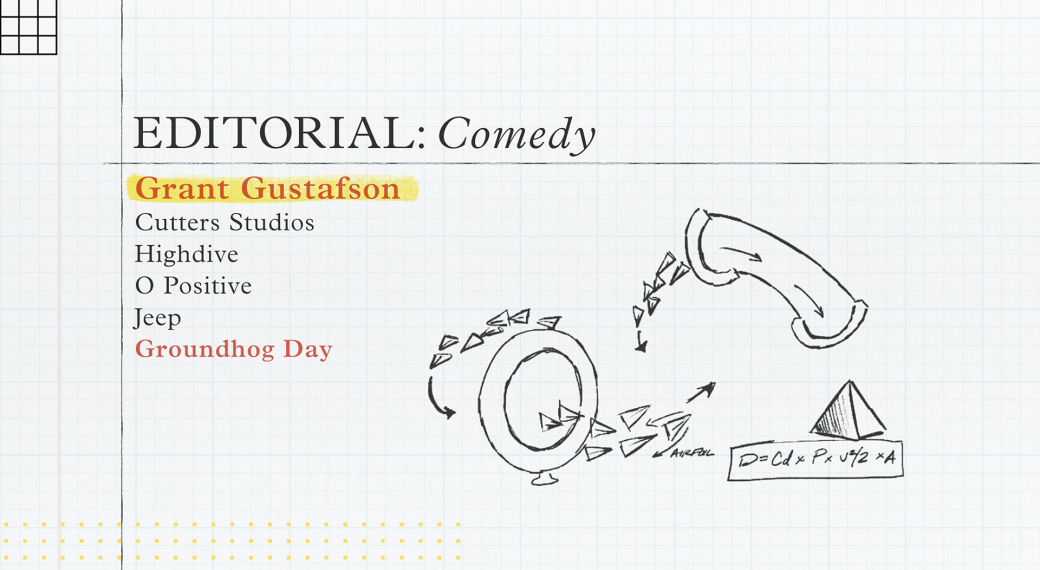 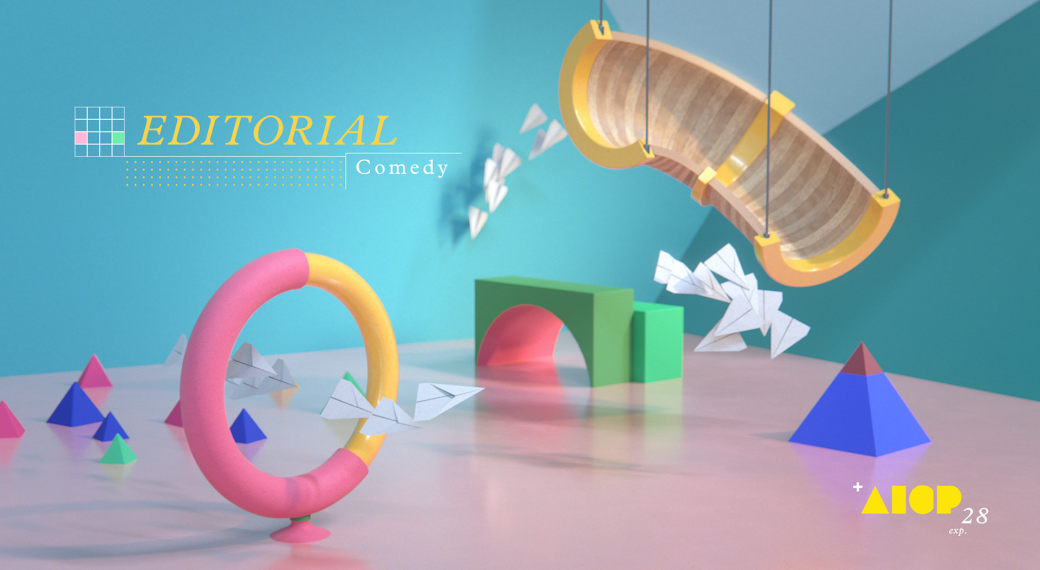 McCauley: Design worked in tandem with the animation team, so once we had a wireframe scene modeled and framed up, we would pass it on to them to begin doing pre-viz and R&D. This way, we were able to keep every aspect of production moving along seamlessly, which we needed to do because the sheer volume of work was so large. We used the pre-viz to build out individual conforms that were sent to our editor, Tom Brassil, at Cutters who was building the entire show.

Cook: All of the concepts were built by our team in C4D under the direction of CG Supervisor Josh Studebaker, using his custom light rig and shader pipeline with a show-tailored color palette. We relied heavily on C4D's powerful deformers to help stylize the animation and design language. In some cases, when we needed a more specific tool, we added X-Particles into the pipeline. Animations for the category and winners' page templates were built in After Effects, while Nuke was used for final compositing. 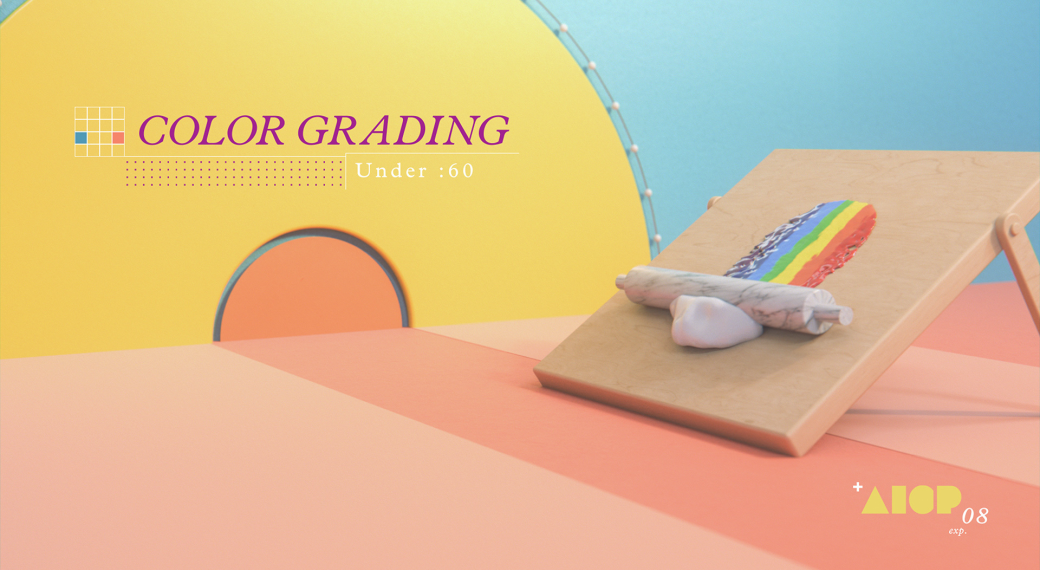 What kind of R&D did you do?

Cook: Using C4D’s built in Mograph and Dynamics systems really helped us be clever about our approach. We played a lot with creating different types of systems that we could easily art direct into what we needed.

McCauley: And believe it or not, most of the math and equations check out. We all were digging deep and nerding out on the science and experiments being sound. It was just the presentation that was more whimsical and playful.

What stands out for you about this project?

Cook: This was the perfect confluence of incredible artists from every discipline coming to the table to do something extraordinary and fun at a time when we all needed it most. I’m incredibly proud of it and hope everyone enjoyed the show as much as we enjoyed making it. 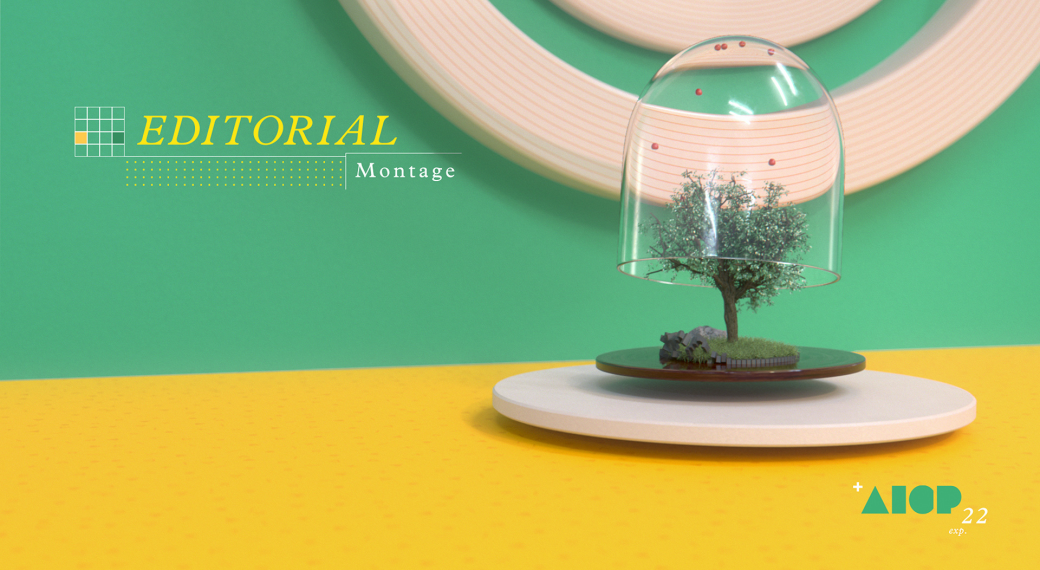