FRILO optimises its BIM Connector® with the latest software update 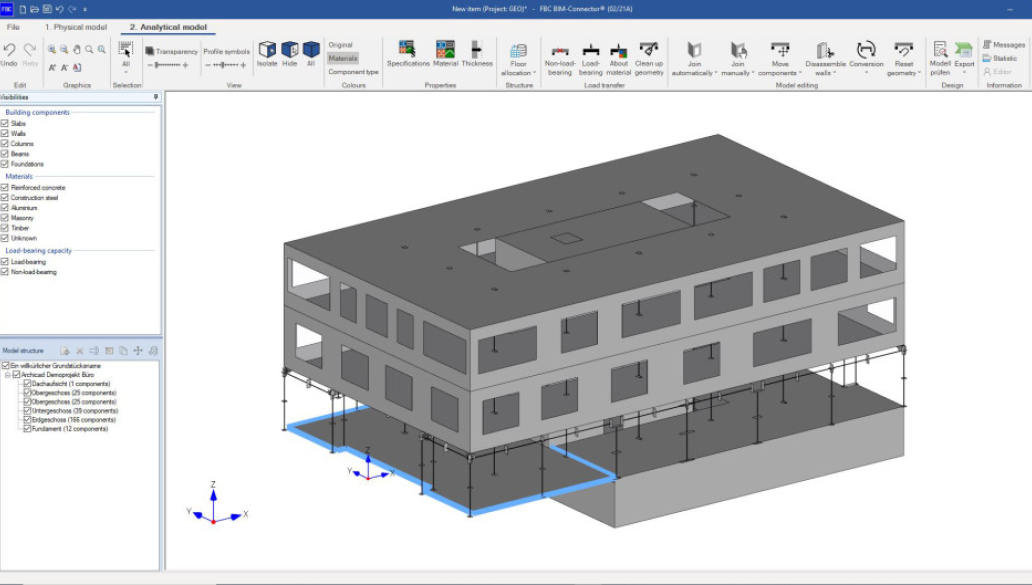 Stuttgart, November 25, 2021 - Since 18 November, structural engineers have had access to the latest version of the FRILO software for structural analysis. Within this update, the provider of innovative solutions for structural analysis and structural design is launching a completely new solution for pile foundations in addition to numerous helpful functional enhancements in existing programmes. With the connection of the FRILO building model to the BIM Connector®, the company has also decisively advanced its commitment to integral building planning.

In the course of Release 2022-1, the calculation model of the FRILO BIM Connector® was enriched with some practical editing functions. For example, the geometry of the model can be cleaned up by simply removing small recesses and openings as well as short beams, columns, walls and slabs that are not relevant for the structural analysis. In order to be able to ensure the correct transmission of loads, component axes can be pushed over each other. In addition, components can now be connected automatically by extending or shortening them in their system axis until they form an intersection line or point. The useful disassembly of walls into individual components is also possible since the software update. Those who want to check whether the building has been modelled in the correct axis after the clean-up can use the new function "Check model". This automated check can be applied not only to the complete building, but also to individual components in vertical and horizontal direction. The BIM Connector has gained additional appeal because FRILO has managed the direct connection of the FRILO building model. Cleaned models prepared for structural analysis can now be transferred loss-free and time-efficiently to the building model for the determination of the vertical and horizontal load transfer of the complete structure. Further transfer options to FRILO calculation programmes are then available for the actual component design.

Generation of wind and snow loads in the programme Framework RSX

In the course of the software update, the possibility was implemented in Framework RSX to automatically generate wind and snow loads for standard buildings that comply with the standard. In doing so, the programme automatically recognises the building contour of standard buildings. The panels (the areas between the bars) to which the generated load is applied for the selected wind direction are also created from the building contour and labelled appropriately without the user's intervention. The generation of the member loads from the area loads is carried out for the selected wind direction using the finite element method. The finite element method is then used to generate line loads on the load-bearing members from the area loads.

The Document Designer FDD has been extended by the possibility of copying items within the programme using the convenient drag & drop function or to drag items from the FRILO Control Center directly into the FDD using the mouse. In the GEO building model, the view in X and Y direction as well as the load case-specific view of the moment curve are available as new display options for horizontal loads across all floors for the walls or columns that are recognised as being on top of each other. Furthermore, the determined H-loads on the individual wall columns and supports can be displayed in elevation. In addition, the stress curves of the wall columns standing on top of each other can be displayed. The programme HTB+ for the calculation of timber beams made of cross laminated timber now carries out the vibration verification. In the solution Reinforced Concrete Column B5+, high-strength steel in the steel grade SAS 670 from Annahütte is available as an additional option for the non-linear calculation (general method).