For a Better Built World: Nemetschek Group and The B1M announce the Winner of the Construction Story of the Year 2022

The Nemetschek Group, one of the leading software providers for the AEC/O (architecture, engineering, construction, operation) and media & entertainment industries and The B1M, the largest video channel for construction, announced the winner of this year’s Construction Story of the Year award: The International Experimental Thermonuclear Reactor (ITER). 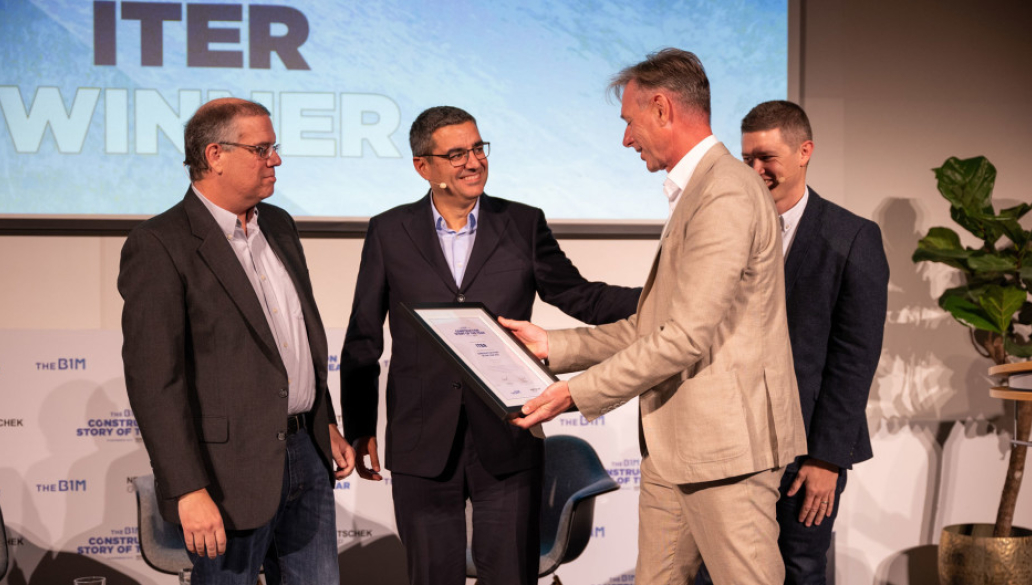 Munich, November 2, 2022 – The Nemetschek Group, one of the leading software providers for the AEC/O (architecture, engineering, construction, operation) and media & entertainment industries and The B1M, the largest video channel for construction, announced the winner of this year’s Construction Story of the Year award: The International Experimental Thermonuclear Reactor (ITER).

The team behind the large construction project received the prestigious award during a live ceremony yesterday evening at the Nemetschek Group’s headquarters in Munich. The expert judging panel was particularly impressed by the extraordinary levels of collaboration between the construction team and the scheme’s propensity to inspire future generations of engineers.

“ITER is a remarkable project that impressively demonstrates what the construction industry is able to achieve. The team has come together collaborating across international borders working on a massive project scale inspiring this and future generations of engineers and all roles contributing to our built world. The project team has proven that working together knows no bounds – regardless of segment, trade or project size, amazing goals can be realized“, says Don Jacob, VP Technology and Innovation, Build & Construct Division at the Nemetschek Group.

The ITER project aims to enable scientists to generate clean and renewable energy from nuclear fusion. To build the project, construction professionals from around the globe are overcoming huge language and cultural barriers by using collaborative forms of contract to bridge divides and employing digital tools to communicate, manage and coordinate project data. More than ten million components are being designed, coordinated, and produced across several different continents before being shipped to France and transported to the ITER site on a specially built road network. Nearly 2,000 workers are engaged on the construction site.

On the shortlist for the Construction Story of the Year were also two other construction projects, firstly the work of the University of Manchester’s Graphene Engineering Innovation Centre (GEIC), which had started to deploy graphene enhanced concrete on live construction projects, and secondly a low-cost eco-housing concept in Melbourne, Australia, developed by Austin Maynard Architects.

“All submitted projects are impressive and show that collaboration, communication, and cooperation are the key drivers to a more efficient and sustainable construction industry. I am sure that these examples will inspire other stakeholders in our industry to actively shape the built world”, says Yves Padrines, CEO of the Nemetschek Group.

The Construction Story of the Year 2022 program aims to highlight the world’s most impressive and inspiring construction stories. It was looking for amazing projects, ideas or initiatives that show the best of the architecture, engineering, and construction (AEC) industry over the past twelve months. The goal of the annual award is to showcase the story that highlights the innovation of the construction industry and can serve as lighthouse project for its digital transformation. The program was conducted by The B1M in partnership with the Nemetschek Group.

About the Nemetschek Group

The Nemetschek Group is a pioneer for digital transformation in the AEC/O and the media & entertainment industries. With its intelligent software solutions, it covers the entire lifecycle of building and infrastructure projects, guides its customers into the future of digitalization and enables them to shape the world. As one of the leading corporate groups worldwide in this sector, the Nemetschek Group increases quality in the building process and improves the digital workflow for all those involved. Customers can design, build, and manage buildings more efficiently, sustainably and resource-saving. The focus is on the use of open standards (OPEN BIM). The portfolio also includes digital solutions for visualization, 3D modeling, and animation. The innovative solutions of the brands ALLPLAN, Bluebeam, Crem Solutions, dRofus, FRILO, Graphisoft, Maxon, Nevaris, RISA, SCIA, Solibri, Spacewell and Vectorworks in the four customer-oriented segments are used by approximately 6.5 million users worldwide. Founded by Prof. Georg Nemetschek in 1963, the Nemetschek Group today employs around 3,400 experts all over the world.
Publicly listed since 1999 and quoted on the MDAX and TecDAX, the company achieved revenue amounting to EUR 681.5 million and an EBITDA of EUR 222.0 million in 2021.

The B1M is the world’s largest and most subscribed-to video channel for construction with over 2.6M YouTube subscribers and more than 20M people watching its content each month. Founded by Fred Mills, The B1M now employs a 17-strong team across the UK, US and Australia. It has been named by The Times as one of the 20 best educational YouTube channels in the world.

The B1M’s mission is to fundamentally change the world’s perception of construction. Its award-winning content, produced by an expert in-house team and hosted by Mills, has earned it a global audience of millions. Over the years, Mills has interviewed Sir Richard Branson, filmed inside London’s Elizabeth Tower, run a billboard advertising campaign on the London Underground, founded a podcast, created Tomorrow’s Build – a channel dedicated to the future of construction – and produced acclaimed, hard-hitting documentaries on New York’s Billionaire’s Row, the HS2 megaproject and London’s Battersea Power Station development.

In 2022 Mills was named an IET Honorary Fellow for his “outstanding contribution to the public understanding of construction and engineering”.