The computer-based merge of the virtual and real world is called augmented reality. This technology is also popular in marketing to make products tangible. Currently only available on smartphones or tablets, the trend is also spreading to film and television.

Imagine a spectacular free kick in soccer: at the same time, an overlay shows how fast the ball was shot and at what angle it will hit the goal. Or the weather forecast for the weekend and the possibility of meticulously tracking the movement of the clouds and the intensity of the sun. Or even a documentary about volcanoes and, at the same time, the images of rising ash and the sounds of a real volcanic eruption. This computer-based extension of our perceived reality is called augmented reality and is a keystone of the Internet of Things. This idea is merging the virtual and real worlds more and more. Unlike virtual reality, where a user is completely immersed in a virtual world, Augmented Reality continues to perceive physical reality but adds virtual elements, such as graphics, statistics, images, or videos. This technology is also popular in marketing to make new products tangible, e.g., to simulate a virtual sunshade on a real house wall. Currently only available on smartphones or tablets, the trend is also spreading to film and television.

The approach of augmenting reality has already been in use for some time. Even in early films, there were static inserts such as "The End" or – in the days of silent movies – written exclamations and dialogs. This kept the viewer interested – and for the first time it was possible to present more information than the film itself could provide. However, these insertions were considered a "luxury item" for a long time: drawn by hand, they were very expensive and time-consuming to create. This was to remain the case for a considerable period – it was not until the beginning of digitalization in the late 1970s that graphics for film and television were professionalized. The first company to specialize in creating graphics in film and television, Digital Effects, not only contributed to the production of opening sequences for motion pictures, but also established itself with the major television networks by producing graphics for their national commercials. This marked the beginning of the era of great change. With the development of the personal computer (PC) and graphical interfaces with icons and symbols instead of green text on a black background, animations could be created in a fraction of the time and completely digitally. This is also how the first animated films were created. The rise of 3D in the 90s created a real competition among creative designers to produce the most realistic and detailed representations possible. But it also changed television forever: until then, the graphics used were bold, required the entire TV screen, and often consisted of composite photographs, map cutouts, and graphics. With the help of 3D and the digital creation of graphics, they became more attractive, and their production became much cheaper – and therefore more lucrative for TV stations, who used them not only in their news programs, but increasingly in sports broadcasts as well.

To this day, the development of graphics for use on television – known as broadcast graphics – has been marked by change. The appearance of the Internet created a new division between reality and graphics. The presenter, positioned to the left or right of the center of the screen, now shared the screen with a content area, usually containing a composite graphic or video footage of the topic, and a ticker area at the bottom of the screen containing the day's major news, weather information, and sports scores and statistics. These modules or segments provided continuous movement on the screen to keep viewers' attention – and criticism: the format was considered as too crowded and overwhelming for viewers.

Today, broadcast graphics are still used for the same purpose as in the days of silent movies or in the sixties – above all, they are supposed to convey additional information, to create additional value. Only the "how?" is subject to constant change. With the help of Augmented Reality, it is possible for the first time to fade in elements, graphics, videos, and visual material that "isn't actually there", to make information tangible and understandable, and to interact with it. The basic requirements to develop those worlds are user-friendly, powerful, and flexible software solutions. The user needs an Internet-capable television, a smartphone or tablet, or so-called augmented reality glasses, so the virtually animated images can be displayed and perceived. The TV program is recognized via the Internet connection between the TV and smartphone, or AR glasses, and the appropriate augmented reality elements are superimposed. 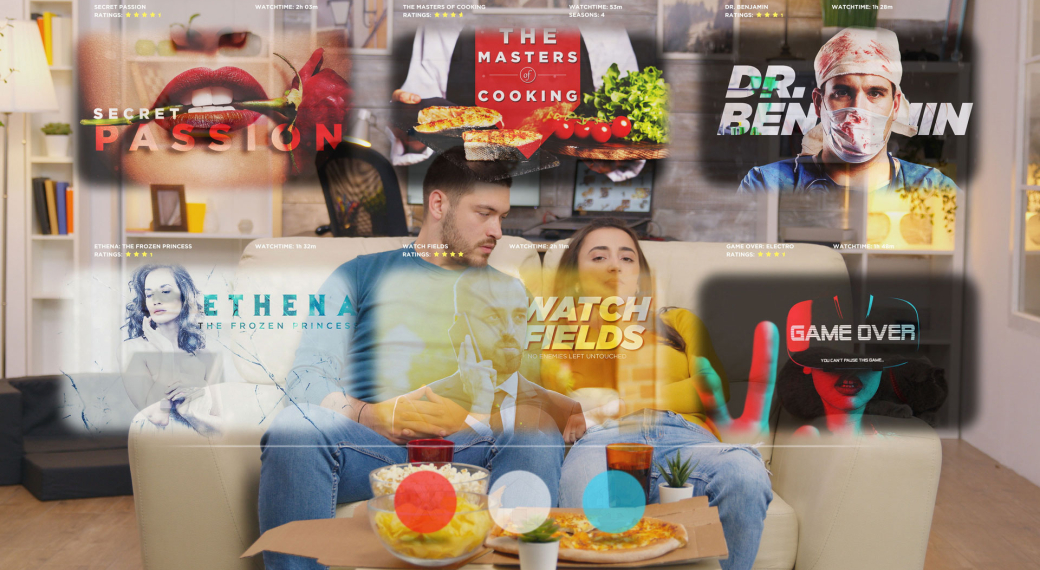 Today, it's no longer a question of when television, and thus our viewing habits, will change – but rather how. "With Augmented Reality, entertainment, news and the world around us can be extraordinarily transformed," explains David McGavran, CEO of Maxon.

Augmented realities can just mark the beginning of a new way of thinking in which smartphones, tablets, the Internet, and television merge, leading to more interaction and active participation in television programming. This sounds promising, but like any other technological innovations, it also faces challenges. "While the potential of Augmented Reality-infused content can be exciting; its overuse could be potentially problematic. Like visual effects-laden films, there is a chance for sensory overload. The best use of AR will be when it’s applied meaningfully and appropriately," David McGavran advises

Even though Augmented Reality is still a niche technology, technological progress proves that in the field of broadcast graphics, where it is important how viewers perceive and process information, Augmented Reality can be an important tool to break new ground in the viewing experience.

The digital revolution is picking up speed. New technologies have the potential to transform almost every industry. How are various countries shaping ...

Wood as a building material has been experiencing a global boost, and not just since the sustainability debate. &quot;Wood is the new concrete&quot; -...

The Benefits of BIM in Practice